The elephant is considered a national animal in Laos for a very long time. For years, it has been the symbol of propensity and represents the strength of the nation. In Laos, people pay their respect for this special animal through festivals and ceremonies. Let’s find out the reason behind it and take one step closer to Laotian belief and culture.

The Belief of many Southeast Countries

So far, tamed elephants are very friendly and useful in carrying out jobs that require strength and power such as farming or even military. They even appear in many legend and myth of many Southeast Asia countries such as Indonesia, Philippines, Thailand, etc about the elephant’s God.

Especially, the white elephant is a rare species that represents for propensity. Because of its scarcity, if a country can own a white elephant, it means it is a powerful one with the wealthy of people and the peace of the whole nation.
The belief is so strong that in Thailand, they even have a story of king to give white elephant for unfavorable mandarin which both shows appreciation for their devotion but also means a punishment for them since raising a precious animal is very costly and difficult (they must do it right and can’t refuse the responsibility).
In the history of Laos, there are many names of Laos through Period. About the first-period establishing country, Laos has names itself as Lan Xang, which means a million elephants. Laotian takes elephant serious here and it is absolutely a joke. 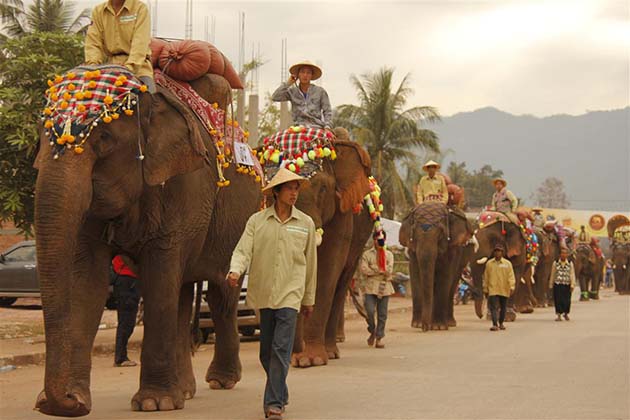 The fact that elephant is a Laotian national animal also originates from Buddhism, the major religion here. The elephant is an Indian Elephant whose hometown is the same as a Buddhist hometown. From the Buddhist perspective, the color elephant represents luck, peace and wealth, especially, the white elephant is the highest representing power and royalty.
The elephant relates to the conscious mind. At first, when people were born, they were the grey elephant. They don’t know what is right or what is wrong and can’t control their actions, just like a wild elephant run freely and destroy everything it encounters. After leading a religious life, it becomes a white elephant that can control its action and is powerful enough to eliminate all of its obstacles.

The image of the elephant is everywhere in Laos: pagodas, temples, Royal Palace Museum, etc. But in Laos, you also notice a three-head elephant image or taboo or even in some temples in Luang Prabang. If you search for the Laotian former national flag, you will definitely see the image right away.

The three-head elephant started to appear about the eighteenth-century since the separation of three smaller countries from Lan Xang in Laos’ history. Those three countries are Vientiane, Luang Prabang, Champassak. The three heads are the symbol of three major Gods in Buddhist/Hindu mythology: BRAHMA, VISHNU, AND MAHESH. Among three of them, the creator is Brahma, the keeper is Vishnu and the destroyer is Mahesh. The three-head elephant flag is still Laos’ national Flag until 1975. After that, they have changed their national flag into a different image.

The importance of elephant symbols is undeniable but now people are seeking for money and turn an elephant into a tool of making money. They are in danger because of logging abuse and luckily, many of them have been saved and start a new life with elephant riding organizations where they can support tourism and be taken care of well.