Dok Champa Flower can be seen almost in all wats and monasteries in Laos. You might not notice along with all the way traveling in Laos. This flower has become a Laotian national flower. Let’s find out what makes this flower more special than the other.

Whenever you travel to Laos, it is easy to encounter this typical flower everywhere. The scientific name of this kind of flower is Plumeria Rubra Flower which belongs to the genus Plumeria and the more well-known name is Frangipani. If you intend to ask locals about Plumeria Rubra or Frangipani, they absolutely don’t have any idea about it, instead, Plumeria is known under the name Dok Champa by Laotian. Dok Champa consists of two parts Dok and Champa. Dok means flower and Champa is the name of frangipani in Laotian. 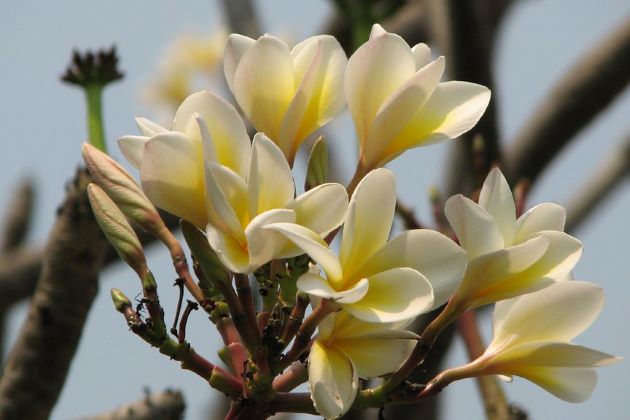 What is Dok Champa Flower?

Dok Champa is a tropical waxy flower and releases a sweet scent when blooming. The flower blooms every day and lasts for a very long time. The most popular color of Dok Champa is normally white but their colors also range from red to yellow to pink. The most important characteristic to recognize the flower is its distinctive yellow center with 5 petals.

The Importance of Dok Champa Flower

From the Laotian perspective, Dok Champa represents sincerity and joy in life. That’s why it takes part in a lot of religious ceremonies such as the Baci Ceremony, a daily ritual practice relating to Animist Belief, as a decoration and is also used in welcoming the guests. We guess that you might have received a frangipani necklace when you first arrive in Laos. With the meaning of sincerity and joy, Plumeria rubra is often grown in temples, pagoda, and monasteries. You can Frangipani from North to South throughout Laos, especially in Buddhist Temple such as Wat Phu in Champassak.
Moreover, it is a frequent in Laos, especially in crowded festivals, we will encounter many Laotian girls or women decorating their traditional clothes or hairstyle with a Dok Champa flower. Eventually, Dok Champa becomes their clothes’ highlight and hairstyles highlight and makes them outstanding among the maze of people.

Dok Champa Flower is the Symbol of Luck 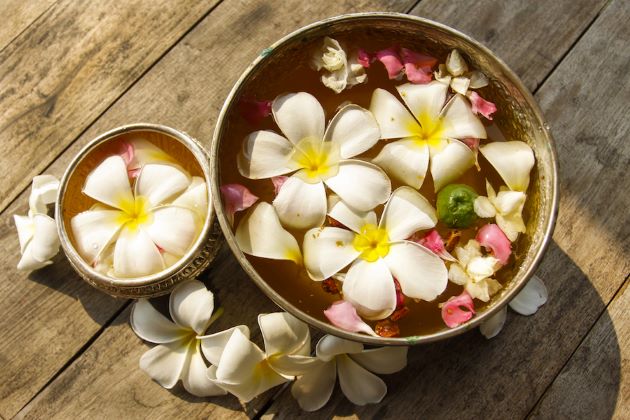 Dok Champa has been favored by Lao culture for a long time and not just recently. It must be said that the frangipani flowers are especially fragrant among others in Laos. It has been always considered a sacred flower and been respected by Laos people. Nowadays, they are used in cosmetics, but also in traditional medicine and cooking. This flower-inspired many artists to compose several popular songs in Laos.