That Phone Stupa, which takes almost 200 years for the ancient Lao people to build this famous temple and even after so many years, devoted Buddhists still flock the area for prayers and offerings. The entire journey to the stupa is a trip worth taking – while on the road, the seemingly endless rice fields and rustic towns can give tourist another inside on life in Savannakhet.
That phone Stupa, which may seem bizarre, however, according to legend and the beliefs of elders, That Phone was served as Buddha’s toilet for seven days and nights during the spread of the Buddhist religion.
The sacred stupa is an important place of worship for Buddhists from Laos as well as northern Thailand. So, when you come to Buddha’s land, please show respect with Buddha, specularly, women have to wear a sinh ( traditional long Lao skirt) before entering the temple ground. If you miss, in the outside, you can hire the skirts or buy it for a nominal amount at nearby stands and stores.
If you want to buy the freshly prepared offering, drop in some stalls within the temple grounds, and are laid at the stupa as a mark of the respect.
To explore the spiritual side of the monument, lace your hands with colorful strings of cotton, clear your mind, and soak up the serene atmosphere as you pray. According to Laos belief, the cotton strings are thought to bestow lasting happiness and are woven by the temple’s older monks.
Alternatively, you can opt for a less serene way to clear the cobwebs by striking a gong and making a wish as you do so. If the gong rings out loudly, it is believed that your wish will be granted. 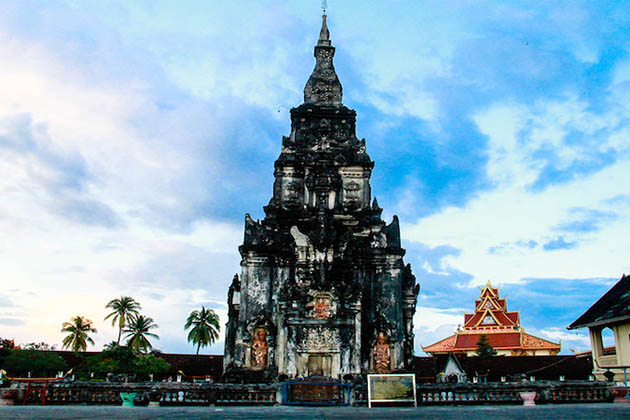 How to Get That Phone Stupa in Savannakhet?

There are two ways to get That Phone from Vientiane. Firstly, you can fly to Savannakhet via Lao Airlines. From the airport, board tuk-tuk to That Phone Stupa. Second, you can take a bus from the Southern Bus Station or drive in your own vehicle along Road 13 South for seven or eight hours until you reach Savannakhet. On the way, you can drop in the other attractions in Savannakhet such as That Ing Hang Stupa, Wat Xayaphoum or Dinosaur Museum.

Best Time to Visit That Phone Stupa in Savannakhet

That Phone is open daily from 8:00 am to 18: pm. Best time to visit That Phone is during the morning before you proceed to other attractions.
As other temple festivals, That Phone Stupa is also held annually during the full moon period in February, celebrating the day when the temple served as a shrine for offering made to Shiva and other Hindu gods.
On the full moon of the third month in the lunar calendar, people present 400 offerings of grilled sticky rice as a gift to That Phone in the belief that this will bring good fortune to the people of the district. 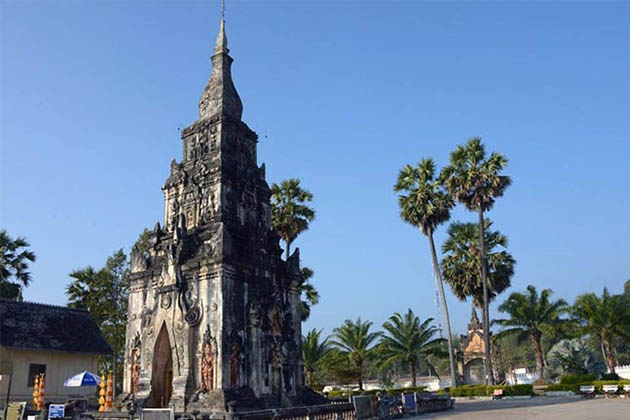