Pak Ou Caves are known as the soul of Mekong River which is one of the most famous sites in Luang Prabang with the limestone caves overlooking the Mekong. By the timeless beauty for over a thousand year, nowadays, Pak Ou Caves is always one of the highlight destinations during Laos Tours.

What are the Pak Ou Caves?

Known as the cave with the most Buddhist statues, filled with thousands of Buddha statues, Pak Ou cave has become the most attractive tourism to come to Luang Prabang, especially in the Northern Laos Tours. The best highlights are that it owned a thousand Buddhist statue and divided into two main caves. The first one is the lower cave called Tham Ting which is not far from the river level. And the second one is the upper cave, Tham Thung, which is smaller and darker. Therefore, this cave is not much more people to come there. Tham Ting filters in some light but a torch is required for the absolute pitch black Tham Thung. In fact, Tham Ting cave is home to the majority of the Buddha statues and the deeper you go, the darker cave is. There is the truth about the cave that the statues have been left in the caves by the locals for hundreds of years.

When visiting Pak Ou, you can be very visible to see the first cave entrance of Tham Ting from the water, the higher cave is accessed by stairs. The Buddha images in the Pak Ou is arranged in a variety of positions, from the meditation to peace and nirvana (the reclining Buddha). Both caves are shrines to Buddha, offering places of workship with the largest image in Tham Ting being a popular place to burn incense and offer prayers. Obviously, the smaller cave is the more peaceful, with glimpses of the Mekong providing a breathtaking backdrop.
There is a truth that Pak Ou Caves are very popular pilgrim site for locals and get very busy during the Laos New Year in April, which is the Buddhist statues will be bathed. Nearby the Mekong river which crossing many other places like Ban Xang Hai village where the place famous for its wine production and for the making of Lao wine earthen jars. It can’t deny that this is a great trip to try locally produced whiskey and wine.

The Best Time to See the Pak Ou Caves

How to Get the Pak Ou Caves

In fact, there are 2 ways for you to come to Pak – Ou caves, Tuk-tuk or Boat Cruise.

The best way to visit the Pak Ou caves is to charter your own boat which is chosen by most tourists. The one with the main reason that you can choose when you leave or stay as long as you like. On the way, you can also choose if you can drop in the Whisky Village. Come to Pak Ou Caves is also have its own interesting. Floating in the Mekong River to see the scenery as well as the Local life in both sides of the river.

Tuk-Tuk to the Pak Ou Caves

If you don’t like to go by boat cruise, tuk-tuk is also a good suggestion for you. Walking down to the main Luang Prabang street, hike a tuk-tuk to take to Pak Ou Caves. However, this option is quite boring because you don’t have the chance to see the scenery. Additionally, you have to get a ferry across the river to the caves when your tuk-tuk arrived at the nearest town.

For the lower cave, you don’t need to bring the torch because this cave gets a lot of natural light. However, for anyone who likes the adventure, you must bring the torch if you want to visit the upper cave. Because the Tham Thung Cave is really dark. In cases you forget to bring, the outside also provides for you with a small fee. 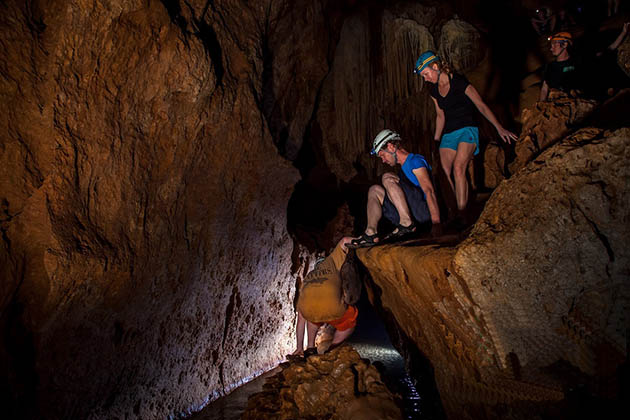 Wear the Shoes to Visit the Pak Ou Caves

You’re going to be climbing in and out of boats, scrambling up rocky riverbanks and climbing lots of steep stone to get the higher place in Pak Ou Cave, so choose the suitable shoes to you that have some grip and won’t fall off too easily.